It’s been busy times here in the Daily life of Dahlia! First off, the biggest news: His Hideous Heart has a cover! Huge thanks to Eric Smith and Paste Magazine for doing a fabulous reveal of the anthology’s amazing cover, designed by Jon Contino with art direction by Keith Hayes! You can see the full reveal post here, but if you just wanna get straight to the cover, ta da! 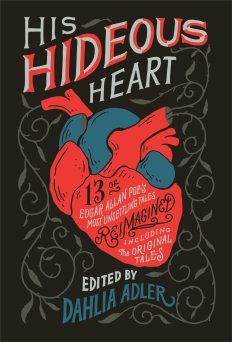 I know what you’re thinking: that is stunning!! Is it available for preorder??? Good news – it is! His Hideous Heart releases on September 10, 2019, but you can get ahead of the game (and help an author out) by ordering in advance!

And speaking of cover reveals, as you may or may not already know, I’m in the anthology It’s a Whole Spiel, edited by Katherine Locke and Laura Silverman, which releases the week before. In case you’re not yet familiar with the collection, here are the details!

A Jewish boy falls in love with a fellow counselor at summer camp. A group of Jewish friends take the trip of a lifetime. A girl meets her new boyfriend’s family over Shabbat dinner. Two best friends put their friendship to the test over the course of a Friday night. A Jewish girl feels pressure to date the only Jewish boy in her grade. Hilarious pranks and disaster ensue at a crush’s Hanukkah party.

From stories of confronting their relationships with Judaism to rom-coms with a side of bagels and lox, It’s a Whole Spiel features one story after another that says yes, we are Jewish, but we are also queer, and disabled, and creative, and political, and adventurous, and anything we want to be. You will fall in love with this insightful, funny, and romantic Jewish anthology from a collection of diverse Jewish authors.

​And yes, you can preorder this one too!

While it is too far in advance to officially schedule events, fingers crossed there’ll be launch parties for both in NYC on their pub dates, so please do save the dates!

And speaking of events, I’m moderating/in conversation at two launch parties I’m really excited about, so come check ’em out! The first is the release of Once & Future by Amy Rose Capetta and Cori McCarthy, and if a genderflipped sci-fi King Arthur legend sounds like your jam, you do not wanna miss it! The book itself releases on March 26th, but the event is March 28th at Books of Wonder in NYC at 6:00 p.m.!

And then in May, you can catch me in conversation with Casey McQuiston, author of the debut contemporary NA romance Red, White & Royal Blue, about a first son and a prince who go from enemies to lovers in one of the most delightful, fun, banterrific, spotlit courtships of our time. That one’s at Book Culture in Long Island City on May 14 at 6:30 p.m., and you can find more info here!

On a completely unrelated note, I have a new website! This blog is staying put, but the old official website’s design is dead, replaced by even more macarons! Check it out at www.DahliaAdler.com and lemme know what you think!

So what’s next over here? Well, starting tomorrow, I’ll be releasing a teaser every week on Instagram that gives a quote from each story, also revealing the title and which of Poe’s works they’re taking on. So if you’re not already following me over there, please do! (Not a bad time to catch up on my #AuthorLifeMonth posts, either!) And yes, there will be ARCs, and eARCs are scheduled to go up this week, so keep your eyes on Edelweiss!

(And if you’re wondering if I bought some extremely fun Poe swag, the answer is OBVIOUSLY, so stay tuned to all my social media for giveaways!)

That’s it over here – I’ve just crossed the 40K mark on my latest manuscript so it’s full speed ahead on the writing front!

Yours in rainbow Gothdom,
Dahlia

Today is a very exciting day, because it marks exactly six months until the release of my second YA, Under the Lights. I am super looking forward to unleashing this book on the world, in part because honestly, I have so much curiosity about how it’ll be received. I’ve never had a book take this many twists and turns during the writing process (and before you say “Well duh, this is your second book, please note that Last Will and Testament, Just Visiting, and The Book of Esther were all written between BtS and UtL, and My Name is Everett and Once You Go Greek were written before any of them). While I love how it came out in the end, it is admittedly a funny little book, twisting the irreverent, douchey narrative of one character with what I hope you’ll think is as fun, sweet, and hot a romance as I do from the perspective of the other, united by…a friendmance, I suppose? I know there are some people who were really hoping UtL would be a romance between Josh and Vanessa, but it isn’t, and I think the book is a million times better for what it is; I hope you guys end up feeling the same way. (Also, if it helps, Van’s love interest, Brianna, looks like this.)

So, that right there is the thing I am most excited for in 2015. I have poured so much into that book, and it’s such a labor of love, and it continuously amazes me that no matter how many times I read it, I’m still not bored of it.

General Updates: I’ll still be in all the usual bloggy places, but I’m also excited to be joining YA Series Insiders. It’s a bunch of fabulous ladies with some really great books out, and I’m looking forward to being part of the group!

February – I’m super honored to have been asked to take part in two events this month:

March – Teen Author Festival! This is one of my favorite YA events of the year, and while I don’t know yet whether I’ll be attending in any authorial capacity, I will definitely be there as a reader and fan!

April – I’ve got nothing going on personally as of yet, but several of my absolute favorite favorite writer people have books coming out then – all books I’ve read that are utterly fantastic – so expect a lot of blog-raving from me that month!

May – BEA BEA BEA! Again, not sure whether I’ll be attending in any authorial capacity, but I live in NYC, so thankfully that means I’m around for much evening partying and general debauchery! Plus my CP Marieke will be staying with me, which is always the best thing ❤

June – (See opening paragraph)(Also my beautiful CP Gina Ciocca’s debut, Last Year’s Mistake, releases on the 9th, and it is YA Romancetastic to the max. I love this book so much.)

August – TBA, but hoping hoping to do an event in the DC area at some point!

November – my third Spencer Hill Contemporary book releases on the 17th! More on that soon….

December – STFU I can’t think this far ahead

So, when/where will I be seeing you??