New NA author alert! Today I’m helping welcome a friend into the wild world of NA, and simultaneously revealing the cover and blurb for her debut, Body Checked! The book is the first in the Capital Ice series, a brand-new NA hockey trilogy, so strap on your face masks, get your sticks ready, and yeah okay I’ll work on my hockey metaphors; the hot cover speaks for itself anyway. 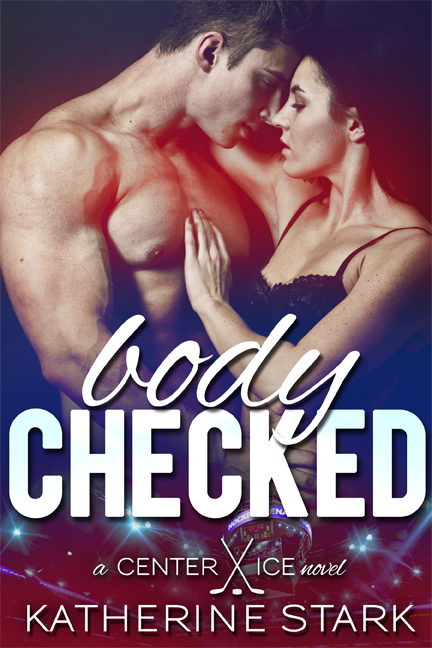 SERGEI DRAKONOV. The newest left wing for the Washington Eagles hockey team is a triple threat: muscle, roughed-up good looks, and a dangerous tabloid reputation. Not the kind of guy who fits into Jael Pereira’s five-year plan. Jael doesn’t have time for a relationship, between her challenging senior-year course load and her stiflingly dull internship at the FBI. But for one steamy night, she gives in to Sergei and his smooth-talking ways.

Sergei wants more than just another one-night stand. But his brother—a high-ranking member of the Russian mob—wants him to help the family business. He can use Sergei as an easy way to launder money, or to smuggle drugs on the Eagles team plane. And if Sergei doesn’t agree, he can kiss his skating career goodbye.

The FBI’s been watching Sergei. When they learn about Jael’s fling, they want her to persuade him to inform on his brother. But the more Jael sees the real Sergei, beyond the role he plays on the ice and in front of the cameras, the more she wants him in her life. How can she win his trust, though, when she’s playing a role of her own? And how can she protect him from his mobster brother when she can’t even protect her own heart?

I glance toward the corridor’s entrance. Sergei ducks through the red velvet curtains and lopes toward me, his eyes glittering in the darkened corridor.

“My name’s Jael.” Shit. Why did I tell him that? But it doesn’t matter. He won’t remember anyway. Just like any of his other countless conquests in the tabloids.

“Jael.” He says it slowly, teasing, testing out the way it shapes on his tongue. I know this because I’m staring at his mouth as he says it, that ripe, boyish mouth, his lips just a little pink from drinking. His tongue grazes along the edge of his teeth as he speaks. And then I’m imagining how that tongue might feel on my earlobe and running between my legs and—oh, god. I have got to stop.

“I promise you,” he says in Russian, “I’m not what you think.” Sergei props one hand against the wall behind me and leans in close. He’s got half a foot on me, and at least a hundred pounds of muscle, but he’s left me an escape if I want.

I tilt my head up toward him and keep the scowl firmly fixed on my face. “And how do you know what I think?”

“It’s what everyone with half a brain thinks about me. That I’m some overly talented, privileged asshole with no discipline and no concern for anyone but myself. That I’ll screw over my teammates, cheat on my partners, and burn through all my money.”

His voice is so low. It hums inside of me, steady as a drumbeat, igniting my every nerve ending.

“They think I’m just skating through on raw talent alone, and sooner or later, all my mistakes and all my callousness are going to catch up with me.” He sighs. His breath is warm against my throat. “Is that what you think?”

“You really think I care enough about you to think all of that?” I ask. “That anyone does?”

Sergei’s hand curls into a fist and he closes his eyes. “I didn’t mean it like that.”

Welp! *fans self* For more on Katherine, to be added to her mailing list and to add Body Checked to your TBR, see below!

You can also find Katherine in our Summer Love party on August 24 at 8 p.m. EST, with a whole bunch of fabulous authors! Hope to see you there!